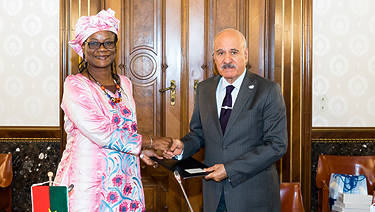 December 5, 2016, Vienna, Austria. The OFID for international Development (OFID) has signed a US$13m loan agreement with Burkina Faso for the Zano-Koupela Transmission Line Project, which aims at reducing energy losses and providing a reliable source of power, particularly in poor, rural areas, for over one million people. The agreement was signed by OFID Director-General Suleiman J Al-Herbish and HE Hadizatou Rosine Coulibaly Sori, Minister of Economy, Finance and Development for Burkina Faso.

At the signature ceremony, Al-Herbish outlined of OFID's cooperation with Burkina Faso, which dated back to the institution’s inception in 1976. The present agreement was of particular importance as it was OFID’s first loan extended to help boost the country’s energy sector. "We are honored to support the Government in its efforts to reach the objective of universal access to electricity."

Thanking the Director-General, HE Coulibaly Sori said energy was one of the major elements of the country's national development plan, devised with the view to increase electrical generation capacity from 300 MW to 1000 MW by 2020. Therefore, the OFID-supported energy project would play an important role in helping the country reach this objective.

The project entails the supply and installation of a high voltage transmission line from the hydroelectric power plant of Bagré, to provide electricity to the city of Koupela and its surroundings. In addition to raising living standards, the project will help decrease the use of biomass, thus having a favorable impact on both the population’s health and the environment.