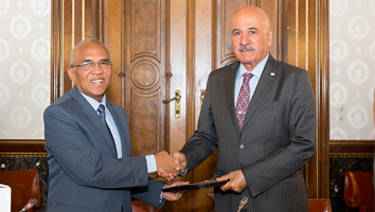 The agreements to Djibouti total US$19m and will co-finance the Tadjoura Port Expansion Project, which will enable the country to accommodate a higher volume of exports; in particular Ethiopian potash. This will contribute to the development of the northern region, one of the poorest parts of the country. In all, around 200,000 people stand to benefit from the project.

OFID Director-General Suleiman J Al-Herbish, along with Fahmi Ahmed El Hag, Advisor to the President of Djibouti in charge of Investment Promotion, signed the agreements.

OFID’s first approval to Djibouti was balance of payments support in 1978. Subsequent public sector loans and grants of over US$86m have been approved in the areas of transportation, education, energy, health, water supply and sanitation and emergency assistance, among others. Private sector funding of US$15m supported the construction of a container terminal in Doraleh near Djibouti City.

Signing the agreements were Mr Al-Herbish and HE François Maurice Gervais Rakotoarimanana, Minister of Finance, Economy and Budget of Madagascar.

Madagascar and OFID’s cooperation began nearly 40 years ago when balance of payments support was extended. Since then, over US$200m in public sector loans and grants have been approved in support of the country’s transportation, energy, education, agriculture and health sectors.