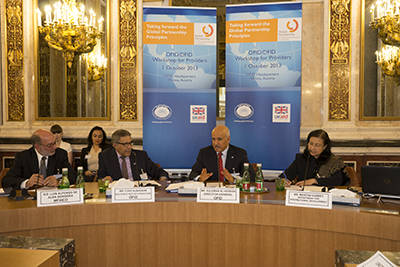 The workshop brought together policy-makers from twenty-three OECD/DAC countries, representatives of multilateral development banks and officials of the sister institutions of the Arab Coordination Group.

Objectives of the workshop were to:

The outcome of the discussions will provide input for the Mexico meeting, a draft agenda of which is being finalized by the secretariat of the Global Partnership for Effective Cooperation.

The workshop also provided a platform for Arab development institutions that are members of the Arab Coordination Group (comprising 10 development agencies, such as OFID, the Saudi Fund for Development and the Islamic Development Bank) to share views and experiences on development effectiveness. On September 30, a preparatory meeting was held at OFID headquarters to discuss various ideas and proposals that were presented at the OFID/DFID workshop.