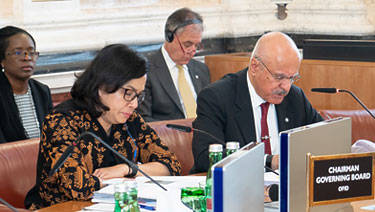 Dr Abdulhamid Alkhalifa, a Saudi Arabian national, will join OFID before the end of 2018 and lead the organization as it continues to support sustainable development in some of the world’s most vulnerable communities. Since 2014, Dr Alkhalifa has been Deputy Secretary General of the Saudi Arabian Public Investment Fund. He is an accomplished and experienced professional who has previously held a number of leadership positions at the World Bank Group.

Outgoing Director-General Suleiman J Al-Herbish was appointed in November 2003 and has served three five-year terms. Throughout his 15 years at the helm of OFID, Al-Herbish has made the organization’s work significantly more relevant and visible, broadening the way that development funding is provided and strengthening cooperation with other development organizations.

Central to OFID’s achievements under his leadership has been its campaign for the eradication of energy poverty, helping to make the world sit up and take notice of the one billion people still living without electricity, and the three billion people who do not have access to clean cooking fuels or technologies.

“In what is one of the best and most inspiring demonstrations of South-South cooperation, our efforts – along with those of our friends in the international arena – have culminated in something remarkable; something that will underpin the entire sustainable development agenda to 2030 and beyond,” Al-Herbish said.