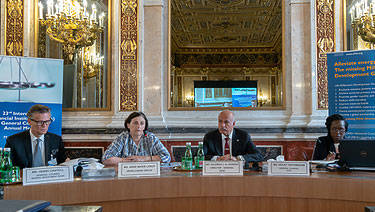 Vienna, Austria, June 1, 2018. OFID – The OPEC Fund for International Development – hosted the 23rd International Finance Institutions (IFIs) General Counsels Annual Meeting at its headquarters in Vienna between May 30 and June 1, 2018.

OFID’s Director General, Suleiman J Al-Herbish, during a welcoming speech, spoke of OFID’s work on the rule of law: “In line with our commitment to the Sustainable Development Goals (SDGs) – among them SDG 16 on peace, justice and strong institutions – we further enhanced our commitment to strengthening the rule of law in partner countries through our partnership with the International Development Law Organisation (IDLO).”

IDLO is the only intergovernmental organization exclusively devoted to promoting the rule of law and OFID was the first multilateral organization to join IDLO. Through this partnership, OFID has financed projects aimed at capacity building, including one to strengthen the legal and regulatory framework in Kenya’s energy sector to attract private sector investments.

In her remarks, OFID’s General Counsel Violet Onyemenam highlighted the fact that “good governance, strong institutions and predictable legal frameworks are critical for sustainable development.” She noted that OFID had in the past extended funding to several projects to promote the rule of law and build effective institutions in partner countries.

During her keynote speech, Anne Marie Leroy reminded the General Counsels of their mission to protect their respective institutions and preserve their stability: “The responsibility that rests upon your shoulders is not just to be a good lawyer. It is also to help the organization live up to the moral standard on which it was founded,” she said.

As part of the agenda, the General Counsels examined the role of their institutions in promoting SDG 16 and how IFIs can support developing countries in achieving their development targets.

Recent developments in data and privacy laws were also at the top of the agenda. In particular, the European Union General Data Protection Regulation (GDPR), which came into effect on May 25, 2018, was discussed. The General Counsels discussed the importance of data and privacy rights and how their respective internal policies could be strengthened to protect individual privacy rights.