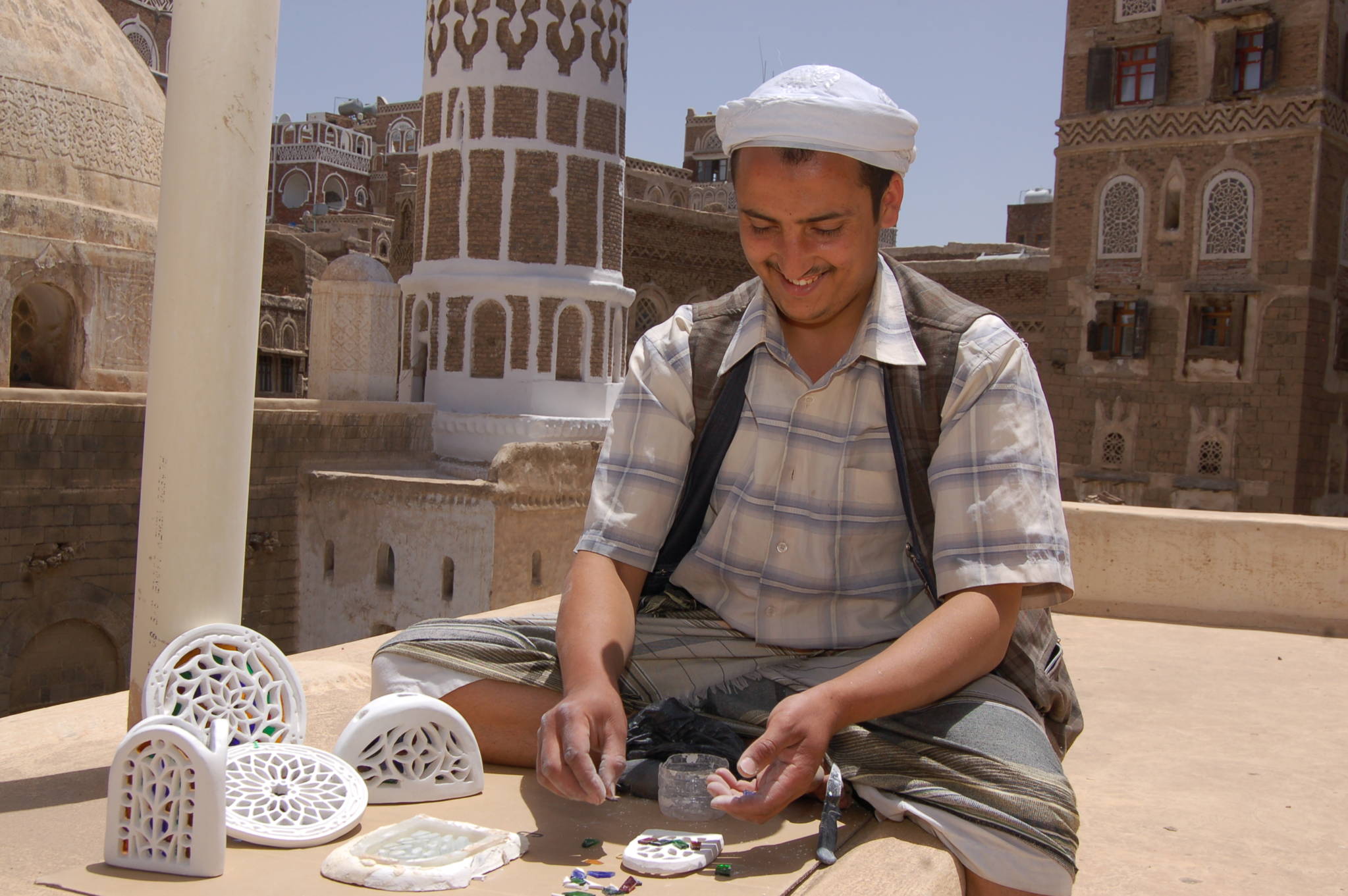 Working toward modernization, while not discarding its customs and traditions, Yemen is facing many challenges. The country is battling growing water scarcity, with just one percent of the land under irrigation. Although this is the largest geographical obstacle, there are others equal in gravity: unemployment, for one, which is linked to the lack of skills of the labour force. For the youth, unemployment is at 52.9 percent.

With roughly two million dwellers, 25 percent of the labor force in the capital city Sana’a is unemployed, despite the city being a gateway to Yemen, an historic and cultural centre and a hub of commerce, services and tourism. Sana’a was, in 1986, declared a World Heritage Site by the United Nations, because of its unique architecture dating back over 2,000 years.

According to a 2009 Statistical Year Book, Yemen’s population has risen to 22.4 million, of which 23.2 percent are aged 15-24. Yemen ranks 133rd out of 177 countries in the 2010 UNDP Human Development Index. Despite the efforts of the Government, progress in human and other development indicators has been too slow to ensure attainment of the MDGs by 2015. However, the possibility of achieving the goals of universal primary education, under-5 child mortality reduction, and an end to malaria and tuberculosis has not been ruled out.

One of the highest priorities for the Government is education. According to the census of 2008, literacy is estimated at 54.1 percent, with a gender disparity of 35.7 percent for females and 73.1 percent for males. This gender disparity is further emphasized when one looks at the ratio of male/female enrollment in vocational secondary schools and vocational training centers. Of the 3.547 students enrolled in three-year vocational secondary schools in 2008, 3,184 (90 percent) were male, as compared with 363 (10 percent) female.

Accordingly, to combat illiteracy and improve opportunities for all, basic education is a priority. In 2002, the Ministry of Education adopted a national strategy known as “Basic Education Development Strategy (BEDS),” which has involved a number of donors and stakeholders, including, besides OFID, the World Bank, UNICEF, WFP, UNESCO, UNFP, JICA (Japan International Cooperation Agency), ILO (International Labor Organization), the German, UK, Dutch and French governments and the EU. The objectives of BEDS include, among others, improving the quality of teaching, reforming the administration of the schools, upgrading the curriculum, expanding school enrollment, enlarging school space for girls and building new schools. An increase in student enrollment necessitates the creation of approximately 7.2 million new student places in schools.

Since 1976, in order to help Yemen advance on its long path to progress, OFID has supported some of Yemen’s efforts in several sectors, such as transport, water supply, energy, urban development and education, among others, totaling US$ 235 million as of July 2011. Yemen’s private sector has also benefited from OFID’s support, through loans to help in the development of industry. Due to the fact that education is one of the most urgent matters to be addressed, the latest project approved in 2010 by OFID’s Governing Board was the “Vocational Training and Skills Development Project (VTSD).” This project is designed to improve skills development opportunities for the rural population, which constitutes 76 percent of the total population.

Mr. Turki Al-Muaikil, Senior Operations Officer at OFID in charge of Yemen’s projects and programs for the public sector, summarized the social impact of this project as follows: “Enrolment of around 9,000 children between the ages of 9-15 years in classes that will enable them to complete the equivalent of primary school education; establishment of a youth vocational literacy component that will target some 4,000 unemployed youth aged 16-24 to empower them with vocational skills and provision of training to 4,000 women in the areas of literacy proficiency, vocational training and business skills development.” This constitutes an important step in the provision of real solutions for Yemen’s people, Al-Muaikil said.

With a total cost of US$21.59 million, the VTSD is a project co-financed by the Islamic Development Bank, the Government of Yemen and OFID. The share contributed by OFID is 42.15 percent. In addition to the financial component, the social component is also relevant. As Mr. Al-Muakil explained, “This is a unique project, which embraces many components to improve the employability of youth, the empowerment of women and strengthening capacity building for the poorest.”

OFID’s contribution began in 1976, with a balance of payments (BOP) loan to support an Education/Training project, followed by many successful and completed projects in vocational, technical training and social fund development as well as the skills development projects for young Yemenis. Since then, OFID’s assistance in Education has been disseminated throughout the 250 vocational and technical training centers located across the whole country, to help in reducing poverty by increasing literacy and employment opportunities.

Some of the benefits have include enabling school children to return to school after completing non-formal basic education or to join a youth vocational training program; providing youth with practical vocational skills that will enable them to join the labor market and providing women with training to develop economic activity to help support their families.

Just as water is basic to life, education is basic to progress because it provides life-giving support for societal development. OFID is proud to support the Yemeni youngsters, the promise of a better future in one of the least developed countries on the Arabian Peninsula but immensely rich in history.