The OPEC Fund and renewable energy 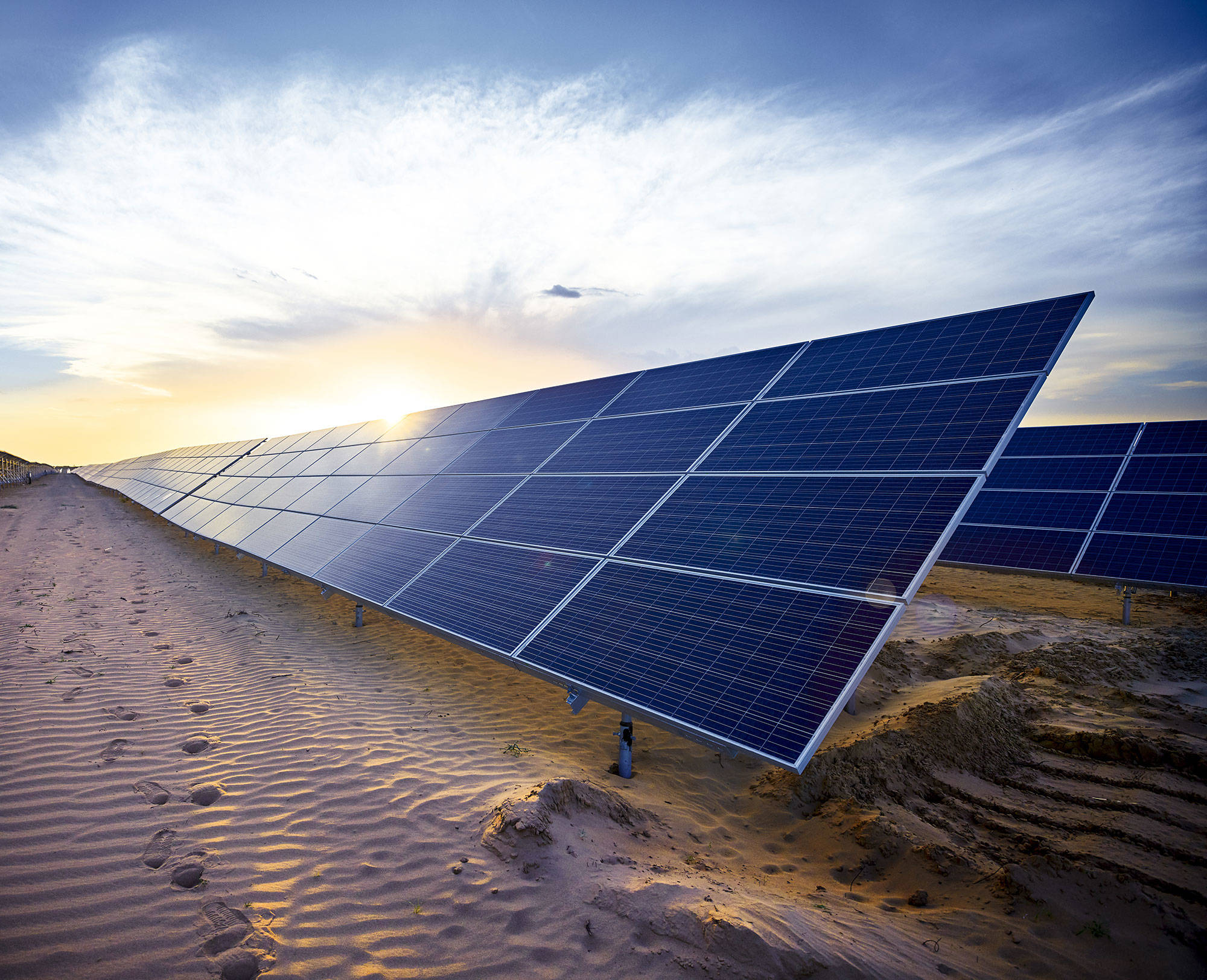 Energy is at the heart of the social, economic and environmental challenges – and opportunities – facing the world today.

Renewables play a key role in the energy supplies of both developed and developing countries. While progress has been made in the uptake of renewables, energy efficiency and energy access, the world is still behind when it comes to meeting the targets of the Paris Agreement or of SDG 7 on access to clean modern energy for all.

To support faster transition to renewable sources of energy, the OPEC Fund continues to commit more financing to both public and private sector renewables projects, technical assistance and grants, and engages in policy dialogue with all energy market stakeholders.” 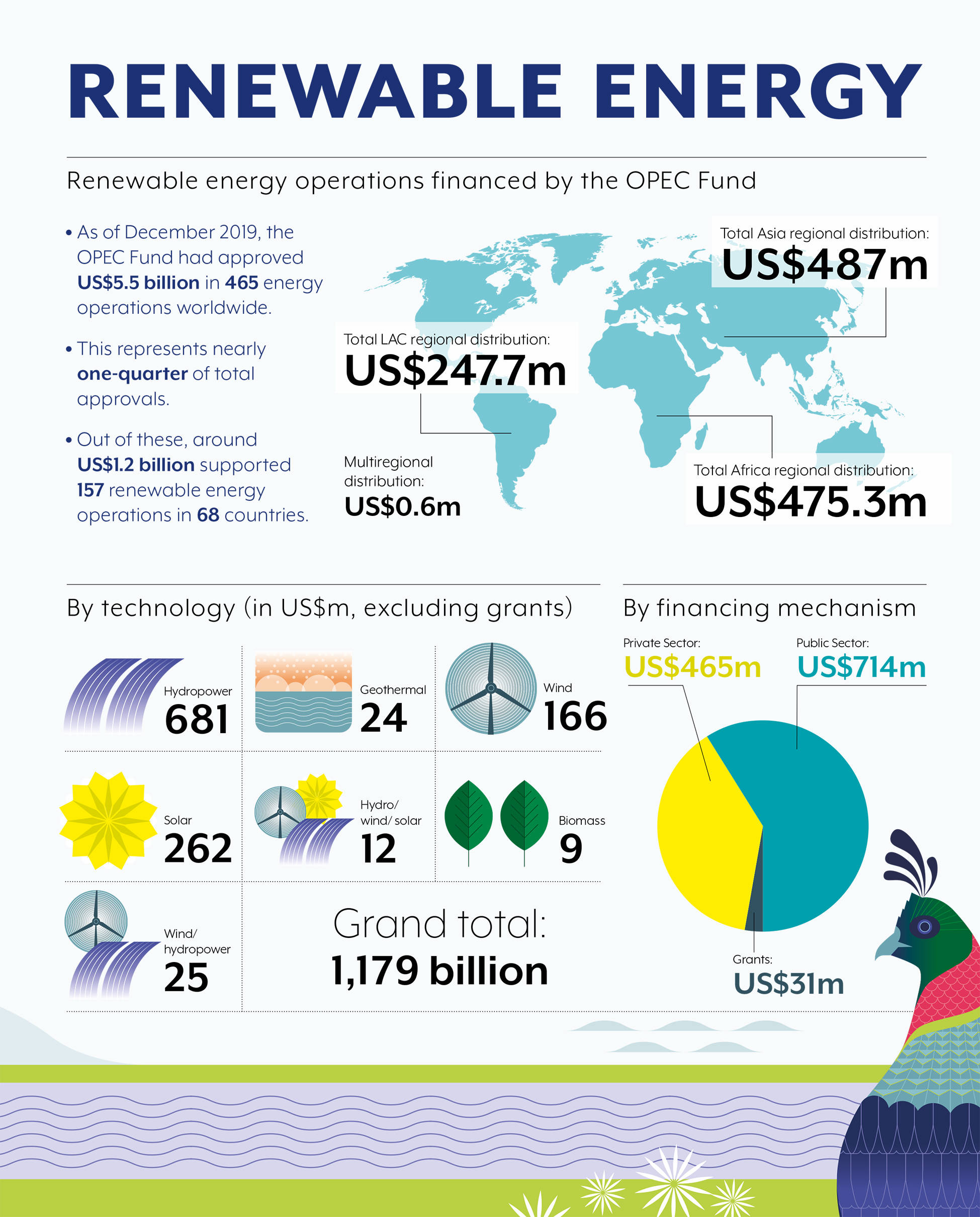 (Recent examples only)
Boulanouar Wind Farm in Mauritania
OPEC Fund financing: US$18 million (public sector)
Total project cost: US$143.7 million
Approved: July 2017
Co-financiers: Arab Fund, government of Mauritania
Boulanouar is the largest wind farm in Mauritania with a capacity to generate 102 MW. The construction of the 39-turbine wind farm was co-financed by the OPEC Fund with a US$18 million loan in 2017. The project is expected to reinforce energy supply to the cities of Nouakchott and Nouadhibou as well as helping Mauritania meet its growing domestic demands and produce a surplus that can be exported.

Access to Sustainable Energy Services in Mali, Niger and Senegal
OPEC Fund financing: US$0.9 million (grant)
Total project cost: US$10.5 million
Approved: September 2018
Co-financiers: DG DEVCO, Plan International
The project aims to enhance access to affordable and reliable modern energy services and promote the productive uses of energy for income-generation in rural areas of Mali, Niger and Senegal. Its specific objective is to provide access to Renewable Energy (RE) Services to rural SMEs run by women and encourage the uptake of RE-related income generating activities. 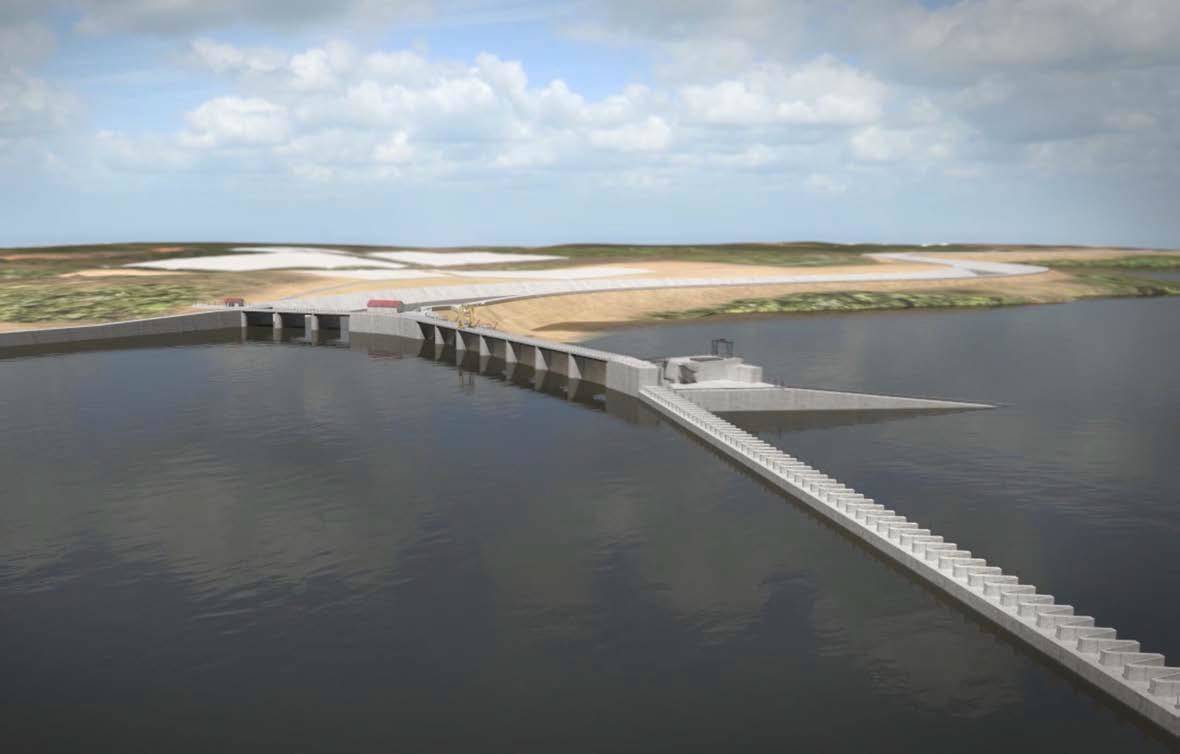 Once in operation, the new plant will be Cameroon's largest generator of electricity.

(recent examples only)
Seven Sisters
OPEC Fund financing:  US$24 million (private sector)
Total project cost: US$118 million
Approved: September 2014
Co-financiers: Arab Bank, Europe Arab Bank, Finnfund, FMO, IFC
Jordan’s ‘Seven Sisters’ are a group of seven solar PV projects and part of the renewable energy program launched by the government of Jordan in 2011. The project included 12 solar power plants. To overcome the relatively small scale of each individual project, the IFC proposed a novel solution: aggregating the first seven of these 12 projects into a single financing program, with a simplified and standardized financing structure. The OPEC Fund contributed US$24 million to two projects. The Seven Sisters added further generation capacity and stimulated the build-out of ancillary infrastructure and follow on investments – in Jordan and in other countries.

Neelum Jhelum Hydropower Plant Project in Pakistan
OPEC Fund financing: US$31 million and US$50 million (public sector)
Total project cost: US$2.8 billion
Approved: 2009 and 2012
Co-financiers: ADFD, Exim Bank of China, IsDB, Government of Pakistan, KFAED, SFD
Two loans were extended by the OPEC Fund in support of this operation for the construction of a 969 MW power plant in the Muzaffarabad district, populated by around 1.5 million people. The project is helping to improve the efficiency of social services – such as schools, healthcare facilities and water supply facilities – as well as encouraging the development of local industries. The new plant will help reduce the cost of energy for newly connected households and farms.

Latin America and the Caribbean

San Marcos Wind Farm expansion
OPEC Fund financing: US$5 million
Total project cost: US$25.3 million
Approved: March 2017
Co-financiers: DEG, FMO, Proparco
In 2013, the OPEC Fund supported the construction of the San Marcos wind farm in Honduras with a US$15 million loan. The 50 MW wind power facility is located in the municipality of San Marcos de Colón, 140 km south of the Honduran capital Tegucigalpa and close to the border with Nicaragua. Completed in 2015, the San Marcos Wind Farm replaced ageing and inefficient plants and helped reduce energy imports. In 2017, the OPEC Fund extended a second loan for this project in the amount of US$5 million to help finance an additional 13.2 MW. The expansion is expected to increase the annual energy production by up to seven percent.

Mlinda Foundation: To enhance access to energy services for some 21,000 people in 41 villages in India by installing mini-grids  including photovoltaic energy. Also, capacity building helped improve farm productivity / provision of energy-efficient appliances such as irrigation pumps.

Solar Powered Smart Grids in Haiti: Brownfield Launch and Model Development – to build a 95 KW solar smart grid that will  serve 500 homes and businesses with 24/7 electricity in a small fishing town in the southern peninsula. Customers, energy vendors and grid managers will interact with the grid through a utility interface that enables pre-payment billing, load management and theft detection to ensure efficient operations. The grid was successfully launched, marking a major step in mainstreaming microgrid power in Haiti.