The heat is on — with geothermal energy

Rarely has the exploratory work going on beneath our feet been more promising, or indeed more essential, given the urgency of the climate crisis 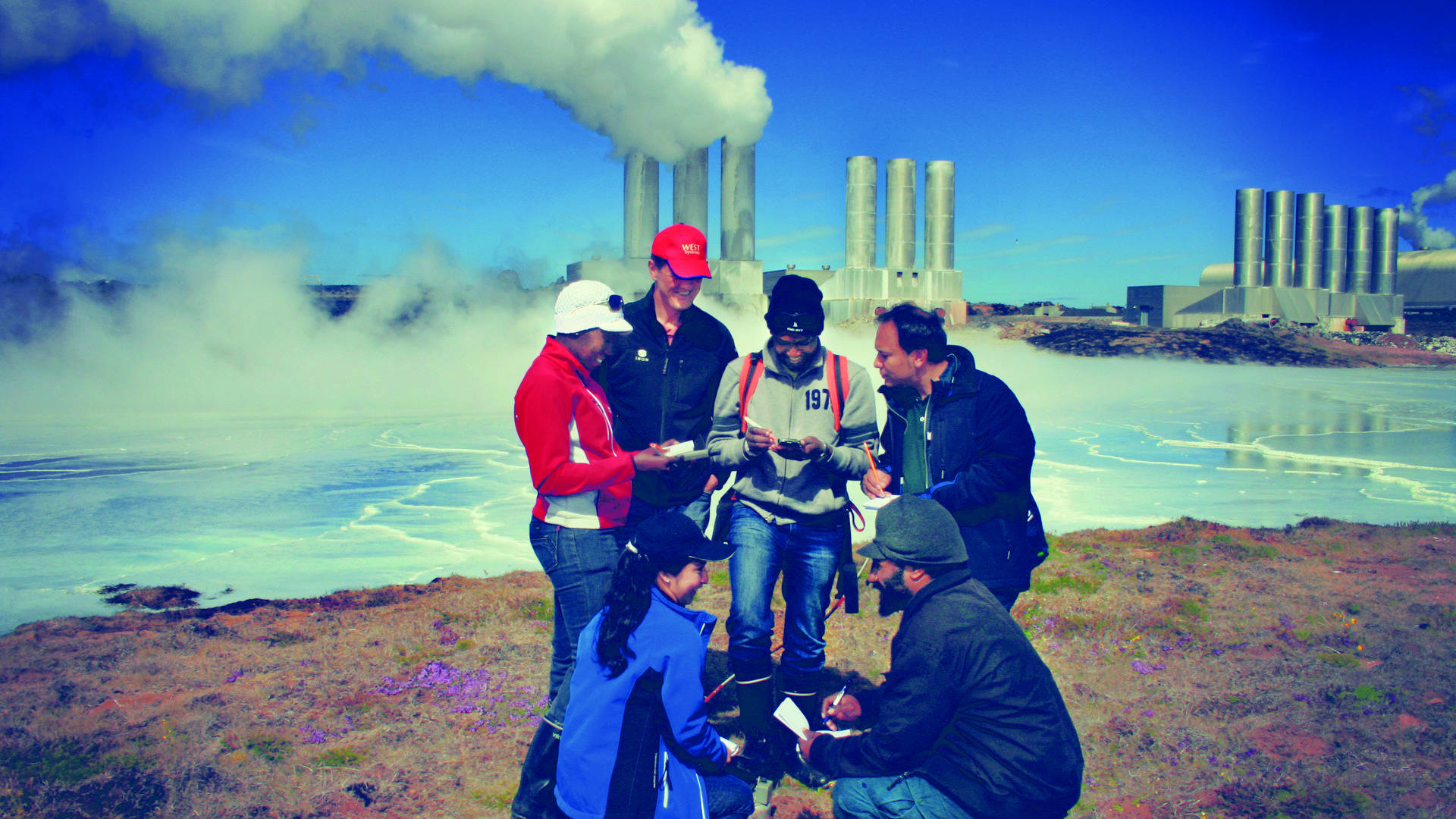 In 1864, Professor Otto Lidenbrock travelled to Iceland with his nephew Axel to abseil deep into the iconic Snæfellsjökull volcano, 120km northwest of the capital Reykjavik. In typical 19th century fashion, with little care for life or limb, the intrepid German explorers embarked on a long and perilous journey, narrowly surviving a series of cave-ins, subpolar tornadoes and prehistoric creatures, as narrated by Jules Verne in A Journey to the Center of the Earth.

That expedition was of course fictional, but the exploratory work going on beneath our feet – worldwide – has rarely been more promising, or indeed more essential given the urgency of the climate crisis. “Here in Iceland, we've been promoting geothermal energy since the 1970s,” says Dr. Gudni Axelsson, head of the GRÓ Geothermal Training Programme under the auspices of UNESCO. “But it's not very well-known in the rest of the world because it's mostly underground and difficult to visualize.”

Above ground the sun shines, water flows and wind blows; elemental, renewable energy surrounds us with its bounty. Austria, blessed with an alpine landscape and mighty rivers, bases half its total installed power capacity and generates three-quarters of its renewable electricity from hydropower, according to the International Renewable Energy Agency (IRENA); meanwhile Italy, home of the “mezzogiorno” midday sun, generates more than 20 percent of its renewable electricity from solar photovoltaics.

“Geothermal still represents a small fraction of all energy use in the world,” says Axelsson. “But it’s been growing rapidly in recent decades and is now quite significant in some countries and not only Iceland.” As of 2020, the lion’s share of renewable electricity in Kenya, the Philippines and Nicaragua came from geothermal energy, responsible for over 55 percent, 50 percent and 28 percent respectively of the countries’ renewable electricity generation, according to IRENA.

Geothermal energy has several advantages compared to other renewable sources. “First of all, geothermal is steady,” says Axelsson. “The baseload doesn’t depend on weather or the seasons, in complete contrast to wind and solar, which fluctuate so much. In Kenya, for example, they have dramatic fluctuations in hydropower because they have dry years and wet years.”

Another advantage is that geothermal energy can in fact be tapped all over the world, not just in places like Iceland or the Great Rift Valley. “Volcanic areas have the highest temperatures and highest concentration of energy,” says Axelsson. “But you also have lower temperature resources in areas where you have tectonic activity or fractures in the ground where water can circulate. You can also tap geothermal energy from sedimentary basins, found in large parts of North and South America, Europe and Central Asia.”

This global perspective was confirmed in September 2022 by Jim Hollis, head of US-based Geothermal Technologies Inc., who told the UK’s Daily Express newspaper: “These hot water aquifers are everywhere – pretty much everywhere you’re getting oil. So we can scale these things globally, and really ramp up the ability to bring geothermal in to complement solar, wind and other things.”

Another benefit is that geothermal energy goes beyond the “simple” generation of electricity. At a fundamental level, it also provides for the “direct use” of natural heat in the form of steam and hot water. In Iceland, for example, geothermal energy covers around 90 percent of heating demand (i.e. the “natural” heat is piped directly into buildings). In hotter countries, meanwhile, geothermal can be used in the agri-food sector in greenhouses, food processing and drying, as noted in a 2019 report by IRENA.

Steinunn Hauksdóttir, Director of Mapping and Exploration at Iceland GeoSurvey (ÍSOR), goes further – underlining not only our capacity but our responsibility to use geothermal energy in the most efficient way possible. “To say it upfront, we’re in a position today that all nations should enable the direct use of their geothermal resources.

“The big money is in power plants and electricity generation, but there should also be a focus on ‘cascaded’ use to harness the energy in a stepwise fashion. You start by taking steam to produce electricity, which leaves colder fluid that can then be used in different ways to heat homes, bathe in or process food. If you’re serious about working in harmony with the environment, you should have a clear row of utilization, each step fitting the next.”

Despite its advantages, geothermal energy remains a bit player in the global energy mix, partly because it’s complicated to access. “One of the drawbacks of geothermal is that this is a resource which is almost completely underground,” says Axelsson. “It takes a lot of investment to assess capacity, so in contrast to wind or solar, it's difficult for companies or developing nations to find the investment needed to locate and quantify the resource, including the money needed to drill wells to bring it to the surface.

“Then you have the political challenges because in many countries the policymakers have a short window in power, which is normally less than the average development time of a geothermal plant. The rule of thumb is that it takes about a decade until you’ll have some geothermal energy production. It’s possible to accelerate things by spending more money, but a lot depends on the size of the project. This complexity is also an obstacle to greater investment from the private sector.”

Another complication is that finding and exploiting geothermal resources relies on cooperation between several different disciplines. “It's not just engineers doing a survey and then coming in to erect a windmill or install solar panels,” says Axelsson. “Geothermal involves so much more: Starting with geoscientists trying to map the resource, engineers designing the various components, environmental people making sure things are done properly, plus solid project management to keep the process coordinated and on track.”

“In terms of scaling up,” says Hauksdóttir, “the most effective approach is to work with other governmental agencies before bringing in private sector financing. Then it’s important to ensure a legacy of capacity building, so that after each project there are people who can take over locally and pass on the complex expertise to the next generation or indeed to other developing countries. In a way, we’re creating competitors with our projects abroad and training courses at home. But we know that it’s for the greater global good.

“The worldwide energy situation is now similar to the oil crisis of the 1970s and it was that window of opportunity that gave politicians in Iceland the courage to say: ‘We're going all the way with geothermal energy’.” So, on balance, given the advantages of geothermal – its steady baseload irrespective of the weather, its “direct use” for heating and food production, plus its availability worldwide near oil or sedimentary basins – it’s time for other nations to show similar vision and courage. It’s time to bite this small but silver bullet.

Iceland’s GRÓ Geothermal Training Programme, under the auspices of UNESCO, dates back to 1979.

People who graduate from the training can then apply for a Master's or PhD scholarship at the University of Iceland or Reykjavik University.

The OPEC Fund’s most recent investment in geothermal energy was completed in 2019 in Djibouti, at the top of the Great Rift Valley. Lewnis Boudaoui, Senior Country Manager, Eastern & Southern Africa, OPEC Fund, explains:

“This project aims at helping Djibouti secure a sustainable and competitive source of energy by drilling four wells to a depth of around 2.5 km, to be used to help generate geothermal energy. The wells are located in the Assal Rift, around 80km northwest of Djibouti City. The project should enable Djibouti to access a secure and sustainable source of energy and reduce its dependence on electricity imports from Ethiopia, which is only possible when the country has excess to sell.”