Small island developing states: When everything is at stake

Combatting an existential threat countries like Tuvalu are saying: “We must take bold action today to secure tomorrow” 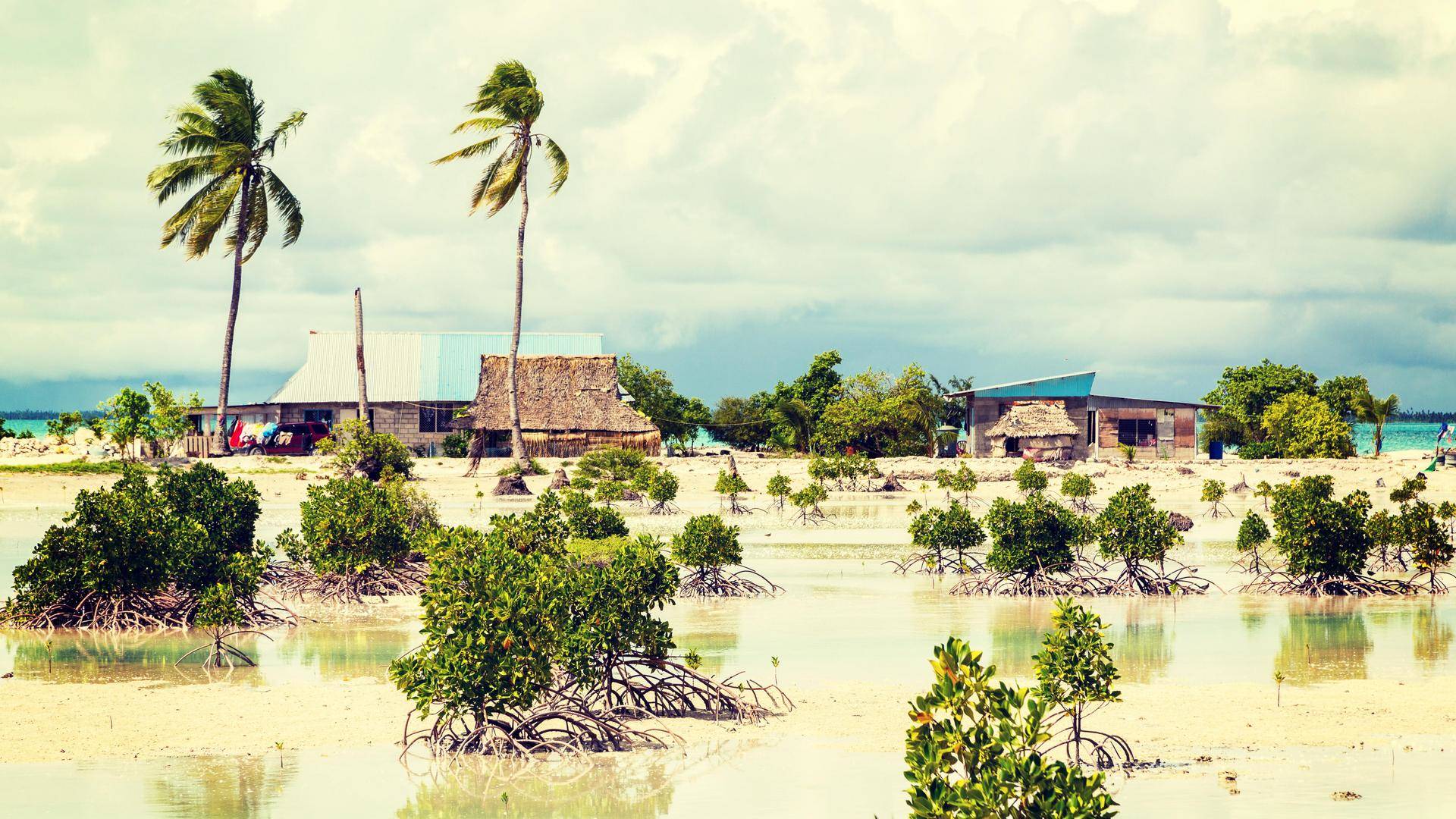 Normally that wouldn’t be news at all, except for the fact of how Kofe delivered his address to COP26 attendees: from a podium nearly waist-deep in water.

The minister stood before the flags of Tuvalu and the United Nations behind him, but all anyone could notice was the water that seemed to rise beneath him. “Climate change and sea level rise are deadly and existential threats to Tuvalu and low-lying atoll countries,” he said. “We are sinking, but so is everyone else, and no matter if we feel the impacts today, like in Tuvalu, or in 100 years, we will all still feel the dire effects of this global crisis one day.”

About 12,000 people live on the island nation in the South Pacific. By almost any measure (population, territory or GDP), Tuvalu is one of the tiniest countries on the planet, but it occupies a large place in the discussion about the effects of climate change and the urgency of climate action.

The foreign minister’s water-soaked speech is more than just an example of expert stagecraft and the power of a cleverly presented message that went viral. It is an illustration of the worst-case scenario for some of the most vulnerable countries on the planet.

When we think of sinking places, Venice may come to mind, but unlike the Italian lagoon city in the Adriatic, many places in the Caribbean and South Pacific cannot afford complicated and expensive engineering solutions to stave off rising sea levels.

These so-called Small Island Developing States (SIDS) are often said to be on the “frontline of climate change” and it’s easy to see why – these nations often have limited development resources and no easy escape plan if a changing environment renders them uninhabitable.

In many ways, the threat to these countries encapsulates a microcosm of climate challenges: more extreme weather events, diminishing resilience in the aftermath of severe weather, loss of jobs, limited access to concessional financing, mass migration, little help for internal displacement, loss of ancestral connections, just to name a few.

The United Nations Office of the High Representative for the Least Developed Countries, Landlocked Developing Countries and Small Island Developing States (UN-OHRLLS) has designated 58 SIDS, 38 of them UN member states. The UN agency is dedicated to helping these island nations achieve the SDGs amid a multitude of challenges.

“SIDS differ in different ways,” said Tishka Hope Francis, Head of the Small Island Developing States Unit at UN-OHRLLS. “You have different sets of vulnerabilities. The Pacific is more remote than others. Some face hurricanes. Some are susceptible to droughts. They are all susceptible to climate change. They have sea-level rise across all SIDS, ocean acidification and biodiversity loss.”

For many of these island countries, natural disasters can wipe away years, if not decades, of development progress.

As with the Tuvalu foreign minister’s speech, the prospect of islands disappearing presents a dramatic backdrop to highlight the dangers these countries face.

“Visibility helps to a large extent,” Francis said. “It helps in negotiations and there are visual and social media campaigns. But it does not automatically translate into access to financing and projects on the ground. Some of them have to do with limited capacity and to keep up with the criteria for attracting financing.”

For example, many least developed countries can qualify for low concessional interest rates based on their level of per capita GDP. The irony is that because many of these island nations have been successful in building their tourism industries, their higher income has made them ineligible for the most favorable development financing terms.

To make matters worse, the COVID-19 pandemic hit the tourism industry hard that many of these countries heavily depend on. Tourism and the related service sector represents 30 percent on average of SIDS’ GDP and exceeds 50 percent in several countries.

“SIDS are especially vulnerable to economic shocks”, Francis said. “It was estimated that travel receipts dropped by 70 percent in 2020 and GDP plunged accordingly. We also saw drops in SIDS that depend on fisheries. There were also impacts on the social level and the crippling effects on the health sector was even more felt in the SIDS.” The worst-case scenario for many of these countries are large-scale displacements of their population, creating both internal as well as external climate refugees.

Dr. Özge Karadag is a senior staff associate at the Center for Sustainable Development at Columbia University. Much of her work includes improving health literacy and access to healthcare for countries affected by an influx of refugees, especially those in war zones. “Most of the aspects of migration will be similar, but for SIDS there will be things that will be unique; people will try to cross smaller bodies of water,” Dr. Karadag said. “This is why they need unique attention.”

“Both for climate- and war-related events the problems in the original countries and the problems during migration will be different,” she said. “For climate-related refugees, the frequency and intensity of access to clean water and access to food security can be problematic.”

Despite the challenges faced not only by displaced populations and their host countries, Dr. Karadag said one silver lining is that the COVID-19 pandemic acted as a catalyst for global action and shared responsibility.

There are other positive actions being planned to address the unique challenges faced by SIDS. The UN is working with the countries to develop a Multidimensional Vulnerability Index that provides a more nuanced, data-driven way to assess eligibility for concessional financing, rather than relying on the one-dimensional approach of only using criteria like per capita GDP or Gross National Income.

Climate action debt swaps are another avenue for financing that would allow some of the countries to swap their debt for climate-friendly development projects. Investment in the “blue economy” that encourages economic growth through the sustainable use of ocean resources can help diversify SIDS’ economies.

In 2024, the UN plans to host a major international conference on SIDS that will update the action plans tackling sustainable development and poverty eradication in these small island nations. As Tuvalu’s foreign minister Kofe said during his watery plea to the world: “We must take bold, alternative action today to secure tomorrow.”

Factfile: The OPEC fund and the Maldives

Over the past few decades, the Maldives has been a development success story, rising up from one of the poorest countries in the world to one with a budding tourism industry with sizable revenues that address some of the country’s structural challenges. Steady improvements in the health and education sectors have also benefitted the half-million people scattered across 185 of the country’s islands.

Yet significant challenges lie ahead. The COVID-19 pandemic and the rise in oil prices has taken a chunk away from the tourism income that the country depends on. Securing favorable financing and proper debt management are critical as the country makes large infrastructure investments. Besides that, there is the ever-present reality of rising sea levels.

Since 1977, the OPEC Fund has committed more than US$300 million in a variety of projects that will help the Maldives achieve the SDGs. Some of the notable projects include: