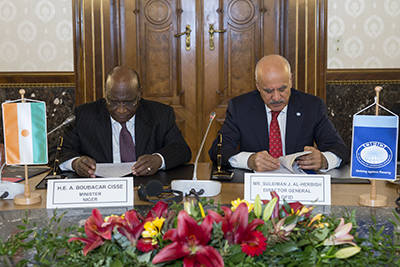 Details of the projects are as follows:

Djibouti. Tadjoura Port Project. US$7m. The project will construct a new port in Tadjoura in the northern region, one of Djibouti’s poorest, in response to the fast and continuing traffic to and from the port. The increased level of trade and overall economic activity will boost the development of the region, and in turn benefit around 200,000 people.

The country has also received a number of grants, including emergency assistance and support to HIV/AIDS programs, as well as regional and multi-regional grants in the areas of agriculture, education, energy and health.

Niger. Emergency Food Security and Rural Development Program (additional loan). US$6m. The program will focus on three administrative regions of Maradi, Tahoua and Tillaberi, predominantly rural areas that account for over one-half of Niger’s total population. The occurrence of drought and floods has worsened food insecurity and poverty among the regions’ farmers and pastoral herders. Around 850,000 people are expected to benefit from the program.

Grant assistance has also been extended, including emergency aid and support of regional programs in the areas of energy, health, water supply and sanitation and agriculture.

In addition to these two loans, OFID co-funded a rural development project in 2008. The country has also benefited from regional grants that supported HIV/AIDS programs, as well as a grant to help strengthen Panama's energy sector.