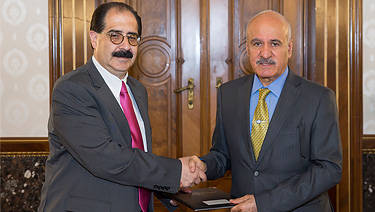 Vienna, Austria, July 7, 2015. The OPEC Fund for International Development (OFID) has signed a US$70m loan agreement with Bolivia to upgrade a key road section interconnecting two of the country’s largest and most populated cities—Cochabamba and Santa Cruz de la Sierra. The road will also facilitate access to the historic city of Sucre. The project will provide a reliable and safe means of transport, boosting socioeconomic activities and trade integration to an area with a combined population of approximately two million people.

The agreement was signed by OFID Director-General Suleiman J Al-Herbish and Ricardo Martinez, Chargé d’Affaires, Embassy of Bolivia in Vienna. During the signing ceremony, Mr Al-Herbish highlighted OFID’s commitment to supporting Bolivia’s development, which to date amounts to US$186m. In his remarks, Mr Martinez thanked OFID for its long-lasting cooperation and emphasized that the new loan represented a very important step in the physical integration of Bolivia.

OFID and Bolivia’s cooperation began in 1979. Since then, over US$174m in public sector lending has been approved in support of a broad range of sectors, including transportation, energy, agriculture, education and water supply and sanitation. A further US$12m has been extended to microfinance institutions in the private sector, in support of local entrepreneurs. OFID has also given regional and national supporting emergency aid, agricultural research, HIV/AIDS initiatives and water supply interventions.