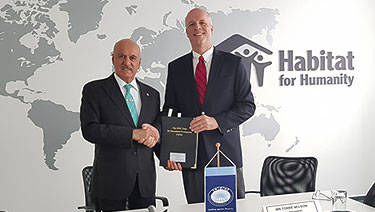 July 3, 2018, Vienna, Austria. OFID - the OPEC Fund for International Development - has signed a US$420,000 grant agreement with Habitat for Humanity International to support a project aimed at improving living conditions for slum dwellers on Peace Island, Greater Monrovia, Liberia.

At the signing ceremony, Al-Herbish spoke of OFID?s strong commitment to helping boost socioeconomic development in its partner countries - particularly the least developed in sub-Sahara Africa. He said OFID would continue directing a substantial portion of its resources to countries lacking adequate water and sanitation infrastructure and facing water shortages.

Torre Nelson thanked OFID for its support, which will dramatically improve the living conditions of families, especially children, who had to walk long distances to reach a water point. He said Habitat's partnership with OFID will enable approximately 13,000 people to gain access to clean water, adequate sanitation and hygiene.

Communities in the district of Greater Monrovia are facing a number of challenges that include a lack of safe drinking water and sanitation services, resulting in a high incidence of waterborne diseases. This situation is exacerbated by unplanned urban growth. The OFID-supported project is part of a broader program underway to provide affordable and better-quality housing among vulnerable and low-income communities.

UN-Habitat will carry out interventions that include building/renovating potable water and sanitary facilities, hygiene and health awareness-raising and providing support to community-led waste collection and management. Also planned is an affordable housing scheme that will provide construction materials and micro-finance loans, as well as capacity building.

Liberia has been a beneficiary of regional OFID grants that have helped fund HIV/AIDS and polio eradication, fight Ebola and support water safety and clean cooking initiatives.