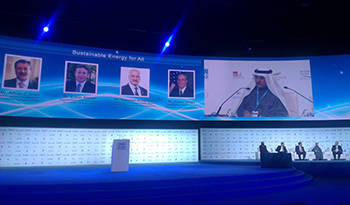 OFID Director-General Al-Herbish at the &#34;Sustainability Energy for All&#34; Ministerial Panel

In Mr. Al-Herbish’s opening remarks, he said “Energy has always featured high on OFID’s agenda since its inception in 1976. And since 2007, after the Third Summit of OPEC’s Heads of State, energy poverty alleviation has become the flagship of our institution.”  In the fight against poverty, the eradication of energy poverty should be the “first and overriding priority,” he stated.

OFID’s assertions on energy poverty alleviation coincided with remarks made in keynote speeches by Her Majesty Queen Rania Al Abdullah of Jordan and Argentina’s President Cristina Fernandez de Kirchner, who spoke of the importance of providing sustainable forms of energy, particularly in the areas of renewables, in eradicating poverty and promoting sustainable development.