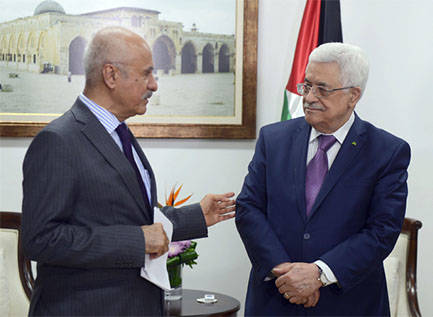 A delegation from the OPEC Fund for International Development (OFID), headed by Director-General Mr Suleiman J Al-Herbish, has concluded a high-level mission to Palestine. The primary purpose of the mission is to reciprocate a visit that Palestinian President Mahmoud Abbas paid to OFID’s headquarters last year.

The final day of the mission was marked by the delegation's visit on April 3rd to the Headquarters of the Edward Said National Music Conservatory Headquarters in Jerusalem, where a US$100,000 grant agreement was signed with Ms Rima Tarazi, Chairperson of the Governing Supervisory Board of the Conservatory. The grant will support the Conservatory's academic and cultural activities that encourage creativity, innovation and the culture of diversity and steadfastness among Palestinian children.

The same day, the delegation toured UNDP/PAPP sites restored under an OFID-funded housing rehabilitation project in East Jerusalem and a number of other ongoing UNDP project sites in the city.

On April 2, the fourth day of the mission, Mr Al-Herbish signed a US$2.5 million grant agreement with Ms Margot Ellis, Deputy Commissioner-Generalof the United Nations Relief and Works Agency for Palestinian Refugees in the Near East (UNRWA). Grant proceeds will co-finance a program that will help improve the quality of education for some 1,600 pupils attending three schools at the Shu’fat Refugee Camp in East Jerusalem.

The delegation also visited the Shu’fat schools and Budrous village in northwest Jerusalem, where a tree had been planted in honor of Mr Al-Herbish and OFID in an olive grove dedicated to “UNRWA's friends.”

A signing ceremony also took place when Mr Al-Herbish signed four grant agreements totaling US$3.3 million with Mr Frode Mauring, Special Representative of the Administrator of the UNDP Program of Assistance to the Palestinian People (UNDP/PAPP) for the following projects/programs:

Mr Al-Herbish also met with President Mahmoud Abbas. A number of important matters were discussed during the meeting, including OFID’s long-standing partnership with Palestine, which began over 35 years ago. In the President’s presence, Mr Al-Herbish signed a US$500,000 grant agreement with Dr Mohammad Mustafa, Chairman of the Board of the Mahmoud Abbas Foundation, to fund a special OFID scholarship scheme that will enable 70 high-achieving students among Palestinian refugees in Lebanon to enroll in Lebanese universities.

At the signature ceremony, Mr Al-Herbish emphasized the full commitment of OFID’s Governing Board in support of Palestine’s socio-economic development, which it treats as a priority. He cited as an example an OFID-funded microfinance scheme that enabled Palestinian families to start their own successful projects.

President Abbas thanked OFID for its efforts in helping Palestinians through the extension of grants across many different sectors, which is helping alleviate poverty among numerous families.

The OFID delegation also attended the inauguration of the OFID Surgical Department at Al-Ahli Hospital in Hebron, the equipping of which OFID supported with a US$1 million grant. Elite members of the Palestinian leadership and Palestinian ministers participated in the ceremony. Dr Jawad Naji, Palestinian Minister of National Economy, spoke of the supportive role played by OFID in providing many forms of assistance to the Palestinian people in the social, health, education and economic sectors. Dr Naji also thanked OFID's Ministerial Council for their tireless efforts in maintaining their steadfast commitment to helping improve the lives of millions of Palestinians.

In response, Mr Al-Herbish affirmed OFID's ongoing commitment to the Palestinian people and the institution’s pursuit of a permanent relationship with Palestine. He also spoke of the possibility of OFID expanding its Palestine grant program once Palestine becomes an independent state.

Additionally, Mr Al-Herbish signed a US$200,000 grant agreement with the President of the University of Jordan, Dr Ekhleif Tarawneh (pictured left), in the presence of Dr Adnan Bakheet, the university’s Director of the Center for Documents and Manuscripts. The grant will support a project implemented by the Center for the restoration of rare manuscripts from Jerusalem.