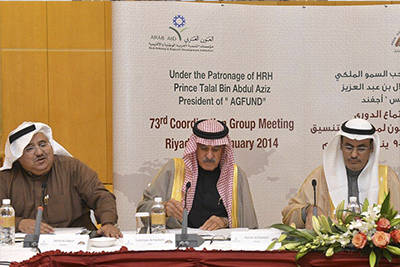 January 7-9: An OFID delegation attended the 73rd Session of the Arab Coordination Group meeting which took place in Riyadh, Saudi Arabia. OFID Director-General Mr Suleiman J Al-Herbish attended the opening session, at which he delivered a statement. The three-day meeting, held under the patronage of HRH Prince Talal Bin Abdul Aziz, President of the Arab Gulf Program for Development (AGFUND), discussed, among other issues, the outcome of the 3rd Arab African Summit, which was recently held in Kuwait, as well as the role played by Arab Aid Organizations (AAO) in actualizing those results. The meeting was also attended by other international development institutions, including the World Bank, the German Society for International Cooperation and the Bill and Melinda Gates Foundation.