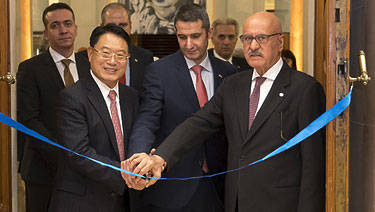 Vienna, Austria, January 26, 2018. OFID (the OPEC Fund for International Development) has celebrated the 42nd anniversary of its establishment with an exhibition entitled In the Garden of Eden – the Marshlands of Mesopotamia (Al-Ahwar) in Iraq. It was jointly hosted by OFID Director-General Suleiman J Al-Herbish and Chargé d'Affaires of the Embassy of the Republic of Iraq in Vienna, Ezat Al-Bhadily.

In his opening remarks, Al-Herbish spoke of how OFID had matured during the last four decades: “We have evolved from a temporary special fund into a pioneering and renowned international development finance institution. Today, we help to set the sustainable development agenda and contribute to alleviating poverty across the world.”

Al-Herbish continued: “OFID is fully committed to supporting the United Nations Agenda 2030 and the Sustainable Development Goals – the global plan of action for people, planet and prosperity. Working with our partners we have helped shape the Agenda and contributed to the establishment of a standalone Sustainable Development Goal for access to affordable and clean energy; something that underpins all aspects of sustainable development.”

Al-Herbish also made reference to the recognition OFID has received in recent years from some of the leading names in international development, such as: former United Nations Secretary General Ban Ki-moon; President of the World Bank Jim Yong Kim; former United Nations Under-Secretary-General and Special Representative for Sustainable Energy for All Kandeh Yumkella; and Director General of the United Nations Industrial Development Organization LI Yong, the latter of whom attended OFID’s celebratory exhibition. All have recognized OFID’s pioneering energy poverty alleviation work.

Commenting specifically on the anniversary exhibition, Al-Herbish said: “This exhibition sits well with the Sustainable Development Goals 14 and 15 in particular, which focus on our responsibility to protect the planet’s precious land and water resources.

“We all have a role to play. Furthering our knowledge and understanding of our extraordinary cultures and ecosystems is an important part in the process. I have stressed many times that international development should be human centered and that the richness of diversity and culture should be maintained and promoted for all of humanity.”

‘In the Garden of Eden – the Marshlands of Mesopotamia (Al-Ahwar) in Iraq’ provides an insight into one of the most precious ecosystems of the planet and a truly inspiring culture that links back to ancient civilizations. Modern day Mesopotamia is formed by parts of Iraq, eastern Syria, southeast Turkey and southwest Iran. Some religious scholars believe that the Mesopotamian Marshes was once home to the Garden of Eden and researchers have discovered links between the Marsh Arabs and the ancient Sumerians – arguably the first civilization in the world.

The event is the latest in a long line of exhibitions hosted by OFID to showcase the cultures of its Member and Partner Countries. This exhibition was jointly hosted by Iraq, an OFID Member Country and also a founding member of OFID’s sister institution: the Organization of the Petroleum Exporting Countries (OPEC). OPEC was created in the Iraq capital at the Baghdad Conference in 1960, by Iran, Iraq, Kuwait, Saudi Arabia and Venezuela.