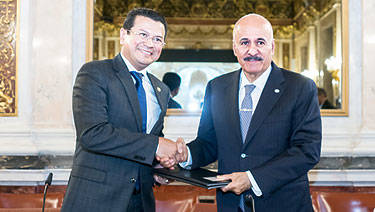 November 22, 2017, Vienna, Austria.  An Agreement for the Encouragement and Protection of Investment (AEPI) has been signed between OFID and El Salvador. The agreement, which sets the framework for commencing private sector operations in the Central American country, was signed by OFID Director-General Suleiman J Al-Herbish and Hugo Roger Martínez Bonilla, Minister of Foreign Affairs of El Salvador.

Al-Herbish said that OFID was committed to supporting low and middle income countries to alleviate poverty. “OFID finances priority development operations that support sustainable development in our partner countries in various sectors such as food, energy, clean water and sanitation, healthcare and education,” he said. “So far, OFID has provided financing to 134 partner countries in Africa, Asia, Latin America and Europe totalling over US$20 billion. These operations are split among Public Sector, Private Sector and Trade Finance, and Grant operations.”

Bonilla expressed gratitude for OFID’s support and said the agreement represented a “new phase” in the relationship between the organization and El Salvador. “This agreement is very important for private sector projects with El Salvador,” he said. Bonilla added that he was impressed by OFID’s Energy for the Poor initiative, something El Salvador was also looking to work toward.

Al-Herbish said: “Signing this AEPI is another important step toward strengthening our partnership. This agreement will enable real economy and local financial institutions to have direct access to OFID private sector financing, further strengthening the economic development of El Salvador.”

OFID’s Private Sector Facility and Trade Financing Facility now form part of the same financing window. The window channels support directly to the private sector in developing countries. Loans are made to financial institutions for on-lending to small-, medium- and micro-enterprises, as well as directly to specific projects. Equity participation in private enterprises is also undertaken, either directly or through country or regional investment funds. As a pre-condition to such investment, OFID requires the signature of a framework agreement with the country concerned for the encouragement and protection of investment (AEPI). The agreement accords OFID the same privileges as those normally granted to international development institutions.