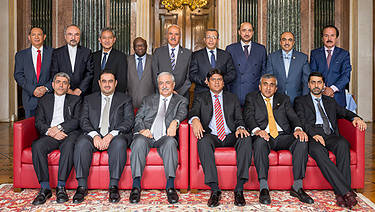 The Council re-elected to the chair the People’s Democratic Republic of Algeria, represented by HE Abderrahmane Benkhalfa, Minister of Finance. The Republic of Ecuador was elected as vice-chair.

The highlight of the meeting’s public session was the presentation of the OFID Annual Award for Development to Syrian refugee and shipwreck survivor, Doaa Al Zamel (see separate press release E15/2106). Ms Al Zamel’s selection as winner of the 2016 Award forms part of OFID’s 40th Anniversary dedication to highlighting the plight of refugees.

Addressing the Council, Mr Benkhalfa, opened with a minute’s silence for the victims of the recent earthquake in Member Country Ecuador.

Reflecting on OFID’s four decades at the service of development, Benkhalfa noted the institution’s purposeful evolution and its adherence to the principles of its establishment, including that of South-South solidarity.

The Chairman went on to review the key global events of 2015, which will shape the future of international development. Placing OFID in this context, he highlighted the institution’s preparedness for what lies ahead. OFID’s strategic plan, he stated, was “both flexible and comprehensive. It is aligned with the newly approved Sustainable Development Goals (SDGs) and at the same time takes into consideration the present economic realities.”

In the Council’s working session, Governing Board Chairman, Abdul Wahab Al-Bader of Kuwait reported on the work of the Board since the last meeting of the Council in July 2015. He disclosed that over US$887m had been approved in fresh lending for 51 projects distributed across the full range of financing mechanisms.

In his own statement to ministers, OFID Director-General Suleiman J Al-Herbish described OFID’s “remarkable journey” since its founding in January 1976. The institution, he said, could look back with pride on four decades of operational success and financial growth. OFID’s greatest achievement, however, had been its transformation from an institution that followed the lead of others to one that advocated an agenda for others to follow.

“Today, OFID is deeply involved in shaping the international development agenda and we are proud to be recognized as a leader by our peers,” stated Al-Herbish.

“Nowhere is our pioneering role more apparent than in the area of energy poverty eradication,” he added, referring to OFID’s instrumental role in positioning energy access in the 2030 Agenda for Sustainable Development.

The Director-General told the Council that, through the prominence gained by its advocacy efforts, OFID had become a platform for dialogue among the different stakeholders engaged in the fight to eliminate energy poverty.

“Using our links to both the development business and the energy industry, we have worked to bring both sides together,” he said, citing the recently launched Oil and Gas Industry Energy Access Platform as a concrete outcome of these efforts.

“With the launch of the EAP, we are proud to have implemented the call of our heads of state in its entirety,” Al-Herbish affirmed, referring to the mandate handed down to OFID at the third OPEC Summit in Riyadh, Saudi Arabia, in November 2007.

The Director-General went on to report on the implementation of OFID’s Corporate Plan for the period 2016–2025 which has adopted as its focus the energy–water–food nexus with transportation as a fourth, enabling sector.

He pointed out: “It is worth noting that OFID’s decision to base its Corporate Plan on an integrated, holistic approach to development was envisioned prior to the approval of the SDGs in September 2015—a clear confirmation that we are operating ahead of the curve.”

Al-Herbish concluded his statement by thanking the Ministerial Council for its support to OFID’s communication strategy, which had seen the institution dramatically increase its visibility, most notably through its social media channels.

Other matters during the session included: consideration and approval of OFID’s financial statements and Annual Report for 2015; and reports on the 20th Lending Program and grant operations.