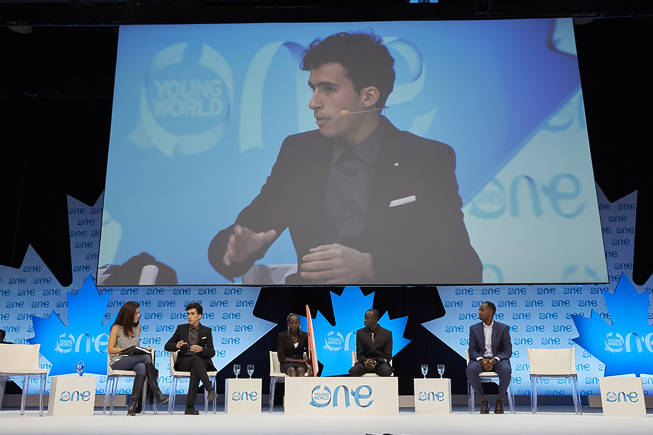 Vienna, Austria, October 4, 2016. The OPEC Fund for International Development (OFID) hosted the session "Refugee heroes" on the last day of the One Young World Summit in Ottawa, Canada. The special session, moderated by Fatima Bhutto, author of Songs of Sword and Blood, brought together inspirational young heroes with refugee backgrounds to share their experiences on stage.

Globally, over 5.8 million people have been displaced in 2016 alone. The refugee crisis has particularly affected youth, who have their dreams interrupted as they leave behind their lives and homes. This year, OFID has dedicated its fortieth anniversary to highlighting the plight of refugees.

Carrying the flag of the refugee “nation” onto stage with them, Hani Al Moliya, Anjelina Nada Lohalith, James Nayang Chiengjiek, and Meron Semedar were welcomed to the hall.

Hani Al Moliya, a Syrian refugee, resettled in Canada with his family a year and a half ago, after fleeing his country and spending months in a refugee camp in Lebanon. Hani, who left only with his high school diploma, was selected to be part of Canadian Prime Minister Justin Trudeau’s newly appointed Youth Council, which was announced at the Opening Ceremony of the summit.

In the session, Hani shared his emotional experience. "In a refugee camp, there is no calendar," he said. "You don't care about time; what you are going to do tomorrow is the same as today." Despite a debilitating eye condition which has rendered him legally blind, Hani was able to document his experience living in a camp through photography. His moving images were exhibited last winter at the annual Canadian Journalists for Free Expression Gala.

Originally from South Sudan, athletes Anjelina Nada Lohalith and James Nayang Chiengjiek were part of the first team to represent refugees at this year’s Olympics. "When I was selected for the Olympics, I did not even know what it was," Anjelina shared. The two athletes were living in the Kakuma refugee camp in Kenya when they began to receive training by the Tegla Peace Foundation. "Sport has brought us together," said James. "We take care of each other and want to show that we love unity."

These young leaders are making a difference. Meron Semedar, an Eritrean refugee based in San Francisco, has devoted himself to advocating for the cause. "Let's not see refugees as a burden," he told the room, adding: "Refugees come with a lot of rich culture, diversity and entrepreneurship." Meron is the founder of Lead Eritrea and has supported young refugees to receive tertiary education.

The heroes, who have all overcome obstacles to achieve excellence, were applauded with a standing ovation from some 1,200 young leaders from over 192 nations. There were warm words also from One Young World cofounder Kate Robinson. Alluding to the torn roots of the inspirational refugee heroes, she told them: "One Young World is your home."

One Young World is a United Kingdom-based not-for-profit organization that gathers young leaders from around the world, empowering them to make lasting connections to create positive change. One Young World stages annual Summits in different world cities where delegates from charities, NGOs, corporations and universities are joined by world leaders, acting as One Young World Counsellors, that included—among others—Sir Bob Geldof, Kofi Annan and Professor Muhammad Yunus.

Since inception in 2009, One Young World has staged six Summits for a total 8,000 delegates between the ages of 18-30 from 196 countries. OFID is one of the founding partners of the One Young World summit and every year supports the attendance of young leaders. To date, over 100 talents from developing and underrepresented countries have participated under the auspices of OFID.