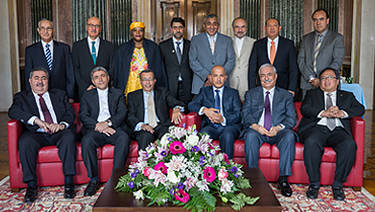 The highlight of the meeting was the approval of a new corporate strategic plan, which sets the framework for OFID’s operational activities and institutional development for the next ten years (2016–2025).

Addressing the Council, outgoing Chairman, HE Ali Shareef Al Emadi, Qatari Minister of Finance, described the agenda as a “significant strategic work plan that focuses on resilience, efficiency and innovative solutions.” The program, he stressed, would capitalize on the institution’s recent achievements, especially with regard to its “special position” in fighting energy poverty.

Al Emadi underlined the significance of the coming months in defining the shape and direction of the global development agenda. Placing OFID in this context, he said that Member Countries had made clear their “continued support of OFID and adherence to the principle of comprehensive and sustainable development for all” in accordance with the new United Nations Sustainable Development Goals (SDGs) to be announced in September.

Reporting on the work of the Governing Board since the last meeting of the Council in June 2014, Board Chairman, Abdul Wahab Al-Bader of Kuwait, disclosed that some US$1.7bn had been approved in fresh lending for 74 projects. There had also been substantial progress in institution strengthening and human capacity building.

In his own statement to the Council, OFID Director-General Suleiman J Al-Herbish, presented OFID as an institution that was “scaling up its activities, growing in stature and influence, and adapting successfully to an increasingly complex and uncertain business environment.”

Citing figures from the latest Annual Report—covering the period January to December 2014—Al-Herbish said that it had been a “record-breaking year,” with both commitments and disbursements reaching the unprecedented levels of US$1.6bn and US$1.1bn respectively. “These figures are not only immensely satisfying in themselves, but also a powerful testament to the success of our various restructuring programs and our ongoing desire to more,” he declared.

The Director-General highlighted OFID’s strategic repositioning to focus on the water-food-energy nexus, which he described as representing “the defining challenges of the 21st century.” The nexus, he said, formed the lynchpin of OFID’s strategic plan for the coming decade. “Already, however, in 2014 we allocated 68 percent of total commitments to nexus-related projects,” he told the Council.

The Director-General went on to outline progress in the implementation of OFID’s Energy for the Poor Initiative in terms of operational and advocacy efforts, both of which had increased. Of special note, he said, was OFID’s decision to lead efforts to mobilize support for energy poverty eradication from the oil and gas industry. “We are now working closely with several companies to activate a platform for action, and look forward to our Member Countries joining this effort,” he stated.

Referring to the “transformational journey” that OFID had embarked upon ten years ago, Al-Herbish reiterated its objectives: to make the institution more relevant, more effective, and more sustainable. “So far, I am pleased to say, we are ticking all the boxes,” he affirmed. He added: “I can say with confidence that, when it comes to optimizing the use of our resources and balancing the pursuit of our mandate with our institution’s financial sustainability, we are doing a satisfactory job.”

The Director-General concluded his statement by acknowledging the dual challenges presented by the SDGs: a new global development paradigm and a new funding architecture. He assured Ministers: “We have confidence in our capacity to deliver on our mandate. We have faith in the unbroken trust and support of our Member Countries. And we know that we can count on the expert guidance of our governing bodies.”

Other matters during the session included: consideration and approval of OFID’s financial statements and Annual Report for 2014; presentation of the OFID Annual Award for Development to the Children’s Cancer Center Hospital of Egypt ; and the naming of four 2015 OFID Scholars from Kyrgyzstan, Nicaragua, Palestine and Sierra Leone.