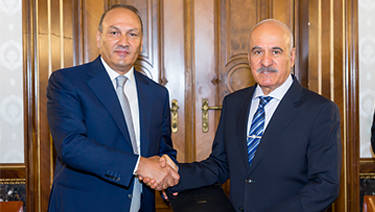 Vienna, Austria, September 4, 2015. The OPEC Fund for International Development (OFID) has signed a public sector loan agreement with Armenia for the "Infrastructure and Rural Financial Support Program,” which aims at reducing rural poverty and raising the socio-economic status of the population, especially among small farmers. The US$25m agreement was signed by OFID Director-General Suleiman J Al-Herbish and Armenian Finance Minister Gagik Khachatryan.

At the signing ceremony, Al-Herbish referred to a high-level visit he had made in 2009, when he had promised the government of Armenia to further strengthen OFID’s cooperation with the country. “This new project is a confirmation of that promise,” said Al-Herbish. He also spoke of the water-food-energy nexus, which would become one of OFID’s priorities covered under its new 10-year strategic plan (2016-2025) approved in July by its Ministerial Council. “We are pleased to note that many of our projects in Armenia have been addressing the nexus,” Al-Herbish said.

In his remarks, Minister Khachatryan expressed his government’s gratitude for the support and cooperation that OFID had provided over the years to his country. He said that all sectors mentioned by Al-Herbish in his remarks were of great importance to Armenia. “They are particularly important for employment generation in our country,” he said.

OFID’s loan will specifically fund a sub-component that will construct and upgrade rural water supply systems to provide households with safe drinking water, as well as water for livestock and staple food production. Another sub-component will develop around 3,200 ha of cultivatable land by installing tertiary irrigation distribution systems. In all, nearly 80, 000 people are expected to benefit from the program. OFID and Armenia

In addition to the newly-signed agreement, OFID has approved a total of US$49m in public sector loans to help strengthen Armenia’s agriculture sector.

OFID has also shown its continuous commitment to the country’s small and medium-sized (SME) sector under its private sector and trade finance windows, having provided financing totaling US$100m to commercial banks in Armenia. The most recent transaction involved a US$10m loan to Ardshinbank to be used for on-lending to SMEs involved in the construction and operation of small-scale hydropower plants.